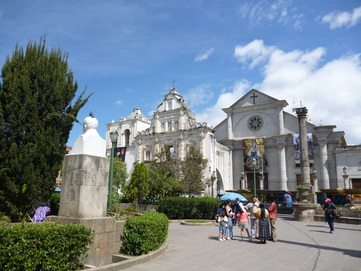 WHY STUDY SPANISH IN QUETZALTENANGO?

Guatemala is known for its stunning natural beauty and rich culture, and the Spanish spoken here is clearly enunciated and easy to understand. Quetzaltenango is commonly called by its original K'iche name "Xelajú" or simply "Xela". It is situated almost 8,000 feet above sea level, surrounded by rugged hills and volcanoes. It is the second largest city in Guatemala with more than 800,000 inhabitants and 15 universities. The city is an inexhaustible source of surprising and fascinating contrasts: adobe shacks with dirt floors and malls selling frozen yogurt, trendy internet cafes on centuries-old cobblestone streets, men in Italian suits using cell phones, and traditionally dressed Mayans. who carry piles of firewood on their backs to their houses. Unlike postcard tourist destinations for studying Spanish, Quetzaltenango offers an authentic environment and is a great place to learn Spanish while learning about Central American culture, past and present.

El Quetzal Spanish school is operated by Glenda Lopez Ximin de Cajas. She was born and raised in an indigenous family in Xela and graduated from university in 1993 with a bachelor's degree in Education. Glenda has more than 22 years of experience teaching Spanish as a second language to foreigners. She opened the school in 1998 with the desire to not only follow her passion for teaching, but also to create a school that could fund scholarships for local girls who lack the necessary funds for her education.

Ella glenda hopes that all El Quetzal students not only have the opportunity to learn Spanish, but also understand Guatemala through learning about the country's culture, history, politics, and social realities.

EL QUETZAL has been authorized and accredited by: